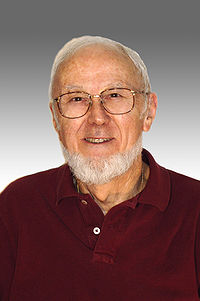 Rich Lingenfelter published his first paper as an undergraduate at UCLA in 1956 on “Shell Structure Effects on Spontaneous Fission Half-Life,” in the Physical Review, 101, 1615-1616. Since then he has published over 270 scientific papers and nearly 20 historical books. Of the papers, 40 have each been cited (SCI/ADS) more than 40 times. He was fortunate to get into physics at the dawn of the space age and was able to stay enough ahead of the observations to make several successful predictions. In the 1960s he and his late colleague, Reuven Ramaty, predicted a Galactic cosmic-ray electron component from pion decay that was soon detected. They further predicted neutron and gamma-ray line fluxes from solar flares that were subsequently observed by SMM and other satellites, and have become a major flare particle diagnostic. With others he also calculated cosmic-ray neutron production in the Earth’s atmosphere, showing the contribution of their decay protons and electrons to the newly discovered radiation belts, and he determined the global production rate of 14C plus its solar cycle and long term geomagnetic variations, that have been a standard for radiocarbon dating for decades. Starting in the 1970s, he and Reuven helped open the burgeoning field of gamma-ray astronomy, modeling various observed sources and predicting the diffuse Galalctic 1.809 MeV line emission from nucleosynthetic 26Al decay, which was discovered by HEAO-3 five years later.

In recent years he and his colleague and former student, Jim Higdon, have shown that the Galactic cosmic rays are accelerated primarily by supernova shocks in the cores of superbubbles, blown by the winds and supernova explosions of massive stars in OB associations. They have further shown that the unique elemental and isotopic abundances of the cosmic rays can all be explained by acceleration out of a mix of roughly 20% massive star ejecta into the ambient interstellar plasma in these cores. This provides the first measure of the spatial and temporal scales of the initial mixing of supernova ejecta in the ISM.

Rich Lingenfelter was born in Farmington, New Mexico, on April 5, 1934, and earned a B.A. in Physics at UCLA in 1956. He worked as a Physicist at Lawrence Livermore National Laboratory from 1957-62, then as a Research Geophysicist at the Institute of Geophysics at UCLA, before becoming a Visiting Fellow at the Tata Institute of Fundamental Research in Bombay in 1968-69. Thereafter, he was a Professor in Residence in the Departments of Astronomy, Geophysics & Space Sciences, and History, at UCLA until he came to UCSD in 1979 when CASS was formed. He was awarded a Fulbright Grant to India in 1968-1969 and was elected a Fellow of the American Physical Society and a Chair of its Division of Astrophysics. He is also a member of the American Geophysical Union, American Astronomical Society, International Astronomical Union, and Western History Association.

His research interests range broadly from high-energy astrophysics theory in the origin and interactions of cosmic rays and the sources of gamma rays, through solar flare physics of neutron and gamma-ray emission, meteoritic isotope production, water on the Moon and Mars, and geophysics in radiocarbon and atmospheric neutron production, radiation belt sources, river flood flows, cloud formation and volcanoes, all the way to the history of the American West and Pacific Islands, mining labor and finance, and folk songs.

Recently, Rich Lingenfelter together with Jim Higdon and Rick Rothschild calculated the expected spatial distribution of both the Galactic positron production from the radioactive decay of 56Ni, 44Ti and 26Al, synthesized in supernovae, and of the subsequent propagation and annihilation of these positrons in the variously distributed phases of the interstellar medium. They showed that these supernova sources alone fully account for all of the observed features and properties of the reportedly “anomalous” diffuse Galactic positron annihilation radiation at 511 keV, which had previously prompted many exotic proposals.

The Influence of the Ionized Medium on Synchrotron Emission Spectra in the Solar Corona, 1967, Journal of Geophysical Research, 72, 879-883. R. Ramaty and R. E. Lingenfelter.