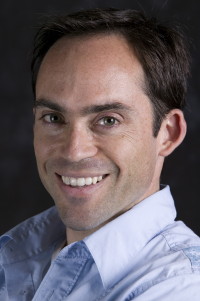 A native of Buffalo, New York, Assistant Professor Adam Burgasser received his B.S. in Physics from the University of California, San Diego, in 1996, and his M.S. and Ph.D. in Physics (with a special emphasis on Planetary Science) from the California Institute of Technology in 2001. His thesis research on the coldest known brown dwarfs (very low mass stars incapable of hydrogen fusion) led to the designation of a new stellar spectral class, the T dwarfs. He continues his observational work on low mass stars and brown dwarfs using facilities around the world, including the Magellan Telescopes operated in part by MIT. After working as a Hubble Postdoctoral Fellow at the University of California, Los Angeles, and then as a Spitzer Postdoctoral Fellow at the American Museum of Natural History in New York City, Professor Burgasser joined the Physics faculty at MIT in July 2005. He also serves as graduate affiliate faculty at the Institute for Astronomy at the University of Hawaii, and resides part-time in Maui with his wife and three dogs. A national springboard diving champion in 1996, Professor Burgasser has coached at both UC San Diego and Caltech.